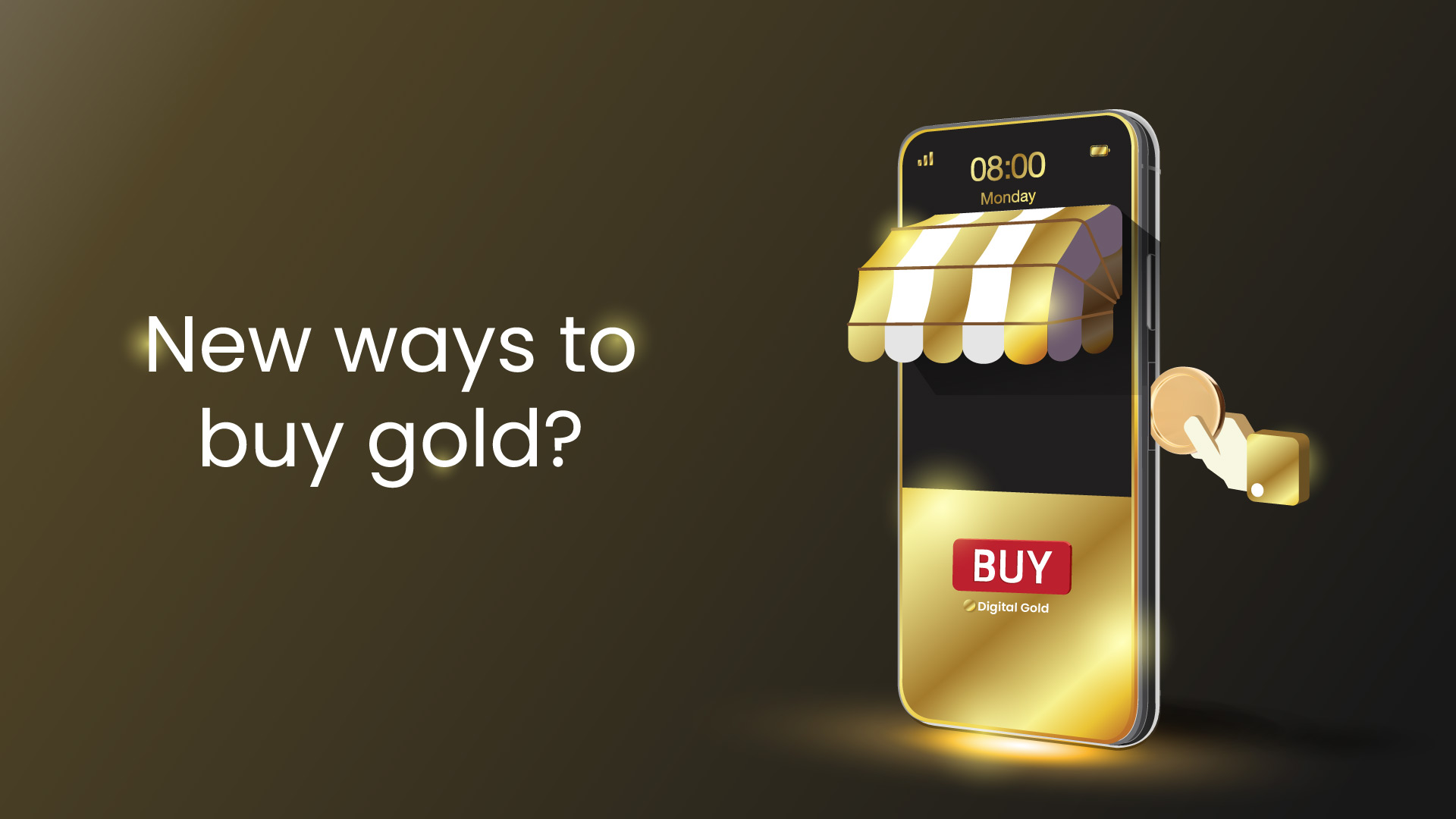 What is the history of Gold? How does it affect the economy? How is it paving its way towards digitalization? Read all about it here.

We all are well aware that Gold has a long history in India. It is more than an investment for us - a culturally significant metal that has found a place in our Indian hearts and homes.

Gold attracts people from all over the world with its beauty and allure. Our obsession with Gold has only become stronger over time.

So much, that Indians now account for the majority of Gold consumed internationally especially on auspicious days like Dhanteras & Diwali.

Even if families are living on meagre means, they find ways to buy Gold and make it an important part of their lives, regardless of Gold rates in their city or village.

This is how Gold has found its buyers across the country. And did you know, according to some estimates, India has a stock of more than 23,000-24,000 tonnes of Gold which is mostly held by households.

But what is the history and journey of this attractive yellow metal? How does it affect the economy? How is it paving its way towards digitalization? Let’s dive in.‍

We’ve attached value to different things and called it money since the dawn of human civilization.

The first system of this type was the barter system - where 2 different things are exchanged between people if a certain level of agreement is reached.

But this has its own problems. The monetary value of each sort of good varied depending upon the hard work involved.

For example, cultivation of wheat and haircut are two very different commodities and the monetary value didn’t match.

Humans have also tried shells as money because they are lovely and rare; animal furs, but they are difficult to kill and salt.

Then came Gold. Some of the earliest Golden items uncovered, for example, date back to before 4000 BC.

It has been prized for its aesthetics, liquidity, financial potential, and industrial properties all over the world.

Even its use in various industries and applications has a long and intriguing history.

Gold does not dissipate into the atmosphere, it does not catch fire, and it does not poison or irradiate the person who holds it.

Its overproduction is problematic, and it's flexible enough to manufacture coins, bars, and bricks.

Hence, Gold was used for commerce for lengthy periods of time before becoming currency and solidifying its place in everyday life.

To protect the value of Gold, early civilisations used purity and weight standards.

According to World Gold Council, many of the world's major currencies were locked to Gold at a fixed price per ounce by the late 19th century, under the 'Gold Standard,' which lasted for almost a century in various versions.

But what is the Gold Standard, exactly?

If India adopts Gold standards and sets the Gold rate at Rs 25000 per gram today, the Indian rupee will be worth 1/25000th of a gram of Gold.

Here’s how the Gold standard was advantageous:
‍

There was an upsurge in financial instability and inflation following the end of the Gold standard.

The price of Gold began to climb again during repeated stock market crashes in the first decade of the 21st century.

At that time, the idea of reverting to the Gold standard was becoming more popular. Gold standards, which were introduced in the 19th and 20th centuries, had intrinsic flaws.

Many individuals are unaware that Gold is a money in today's system. Gold is frequently associated with the US dollar, owing to the fact that Gold is normally valued in US dollars.

The dollar and Gold prices have a long-term negative relationship. When we observe that the price of Gold is merely an exchange rate, we must examine these aspects.

A paper currency can be traded for Gold in the same way that US dollars can be exchanged for Japanese yen. Gold was also important in the development of money.

Gold has held its worth and purchasing power as a financial asset for many years, even during periods of high inflation.

In India, The Multi Commodity Exchange (MCX) is where Gold is traded.‍

How Gold steers the economy?‍

Gold, directly or indirectly, impacts the economy of any country - be it at the mining stage, the refining stage, the production stage or trading stage. Let’s take a look at all the factors.

1. Gold imports have the potential to depreciate a currency's value.

On the other hand, if a country imports far more than it exports, the value of its currency would depreciate.

Similarly, a country that exports Gold would see a rise in the value of its currency as the Gold rate rises today, as the value of the country's exports rises.

In other words, when Gold prices rise, countries that export Gold will experience a trade surplus, resulting in a strengthening of their currency's value, and vice versa.

For example, if the Gold rate rises today, the value of the Indian rupee will fall because India is one of the world's largest importers of Gold.

Interest rates are linked to Gold prices. Low interest rates make Gold a good alternative to bonds and other fixed-income investments, which pay little in income and risk losing a lot of value if rates rise.

High interest rates, on the other hand, make bonds considerably more appealing than non-income-producing assets like Gold, and the high borrowing cost for investors who must take out loans to acquire Gold causes demand for the yellow metal to dry up more quickly than usual.

As the value of financial assets such as stocks and bonds is threatened by inflation, Gold becomes increasingly appealing as a store of value.

Because inflation is typically associated with periods of economic turmoil, many investors consider Gold to be a safe haven asset that may be used in a variety of situations, from geopolitical war to systemic financial instability.

When investors lose faith in currency, they naturally resort to Gold, which tends to drive up prices.

Of course, the fact that these and other factors tend to move in opposite directions at the same time highlights how difficult it is to identify the link between economic conditions and Gold prices.

Understanding some of the basic fundamentals of how the Gold market operates, on the other hand, can help you invest more efficiently in the commodity.

Gold prices, on the whole, tend to mirror changes in the value of the US dollar in relation to other currencies.

When the dollar is strong, Gold will be more expensive in foreign countries whose currencies have depreciated in value, even though Gold prices remain unchanged in dollar terms.

India's socio economic development is significantly boosted by Gold mining. Mining also aids in the development of infrastructure and the establishment and maintenance of related service sectors, all of which often last well beyond the mine's operational life.

The country's Gold mining business, on the other hand, has been essentially inconsequential.

In 2015, India mined about 45,000 ounces of Gold, and its total Gold output, including Gold produced as a by-product of copper mining on the subcontinent, is little over 1.5 tons.

Currently, 5-10% of India's Gold manufacturing sector may be classified as "organised" large-scale operations, whereas these would have been unheard of just ten years ago.

Nearly 65% of Indian jewellery is handcrafted, and the vast bulk of the industry is still dominated by small workshops with two to four Goldsmiths.

When a country's total imports and transfers exceed its total exports, a country is said to be in CAD.

The practice of pledging Gold as collateral has long been a part of India's Gold market.

This creates a big impact as, for example, Gold loan companies were successful in persuading the government to restore the 75 percent LTV (loan-to-value) ceiling in 2014 after a period of lobbying, and business has since recovered.

In today's society, just 8% of money is physical, with the remaining 92% being non-physical or digital.

And Gold is keeping up with this digital transformation at a fast pace. From being sold in physical form (Gold bars, coins and jewellery) to ETFs and SGBs, one can now buy Gold digitally, from a very small amount in seconds.

Thanks to smartphones, e-wallets, and flexible investment schemes that are luring new purchasers into this industry, inculcating the habit of savings altogether.

Although online Gold transactions have been on the rise around the world for some time, they are still a relatively new phenomena in India, where Gold jewellery and bars are typically held in hand and given as gifts.

The Gold banks - MMTC-PAMP India Pvt Ltd, SafeGold and Augmont offer apps that allow smartphone users to buy, sell, and keep Gold - even in little amounts - in secure vaults operated by them.

Gold-based financial products, such as Gold Accumulation Plans (GAPs), allow consumers to buy and keep Gold in fractions as small as 0.1 grams, which would be too expensive to exchange physically due to handling costs.

Digital Gold, in simple words, is a new age version of buying gold through online channels.D It is available 24 hours a day, 7 days a week. One can simply access, buy, sell, and redeem from their offices, residences, or wherever else they desire.

Young Indians are attracted to these savings programmes, as well as Gold-backed bonds and websites selling coins and jewellery that can be transported for free or cheaply within India.

Even individuals with a strong desire for Gold in the past had to wait until they had saved enough money to invest. Now it's all convenient and cost effective.

For every gram of gold you buy, there is actual 24k gold stored in a locker in your name by one of the three gold banks in India - Augmont | MMTC - PAMP | SafeGold.

Investors can easily buy, sell or order physical gold to be delivered at home with a click of a button on the app. Also, there is no minimum limit to buy digital gold. You can start from as low as ₹1.

Jar is a daily Gold savings app that makes saving money a fun habit by saving a small amount of money in 99.99% Digital Gold every time you spend online.

Just like a digital Piggy Bank. You can easily create a Jar App Account in under 45 seconds. It is a paperless process and no KYC is needed to start saving in Jar App.

Now that you know what a reliable and safe asset Gold is, why not invest in it? It only takes seconds. Start your investment journey with Digital Gold. Download the Jar app now and get started.